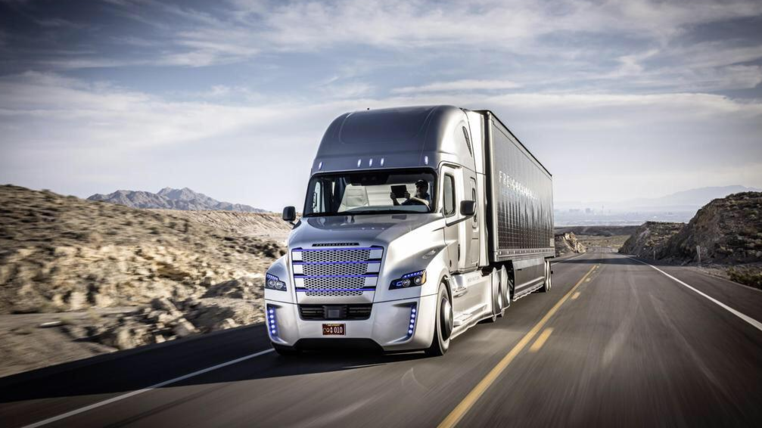 A lorry that drives itself – Ready now

Remember the Top Gear episode a few years back when Lexus claimed their LS could park itself? It was subsequently tested in the studio and seemingly had a mind of its own, trying to attack several boxes and audience members like a rather large, metal Sumo.

Things seem to have come along a bit since then…

What’s better than a car that can park itself, what’s bigger, more powerful and more useful to businesses?

Whilst vehicle manufacturers are getting their knickers in a twist trying to create the first widely used autonomous car, Daimler have been quietly working away making something a little different.

An autonomous truck, good old Germans eh? Can always rely on them to make something useful.

Not only has it been created, but it’s also been approved.

Nevada have now Licensed the truck for commercial use. That’s not a testing license, it’s a fully fledged operating license. So when you’re travelling along a Nevada highway, don’t be too alarmed if a truck with no driver comes hurtling past you.

“We believe that these vehicles and systems are ready.” says Daimler executive, Wolfgang Bernhard. I like belief, it’s sincere, but it doesn’t stop accidents.

It seems like a fantastic solution and Daimler themselves have said the computer must be “significantly” safer than a human for it to consider using and selling the system.

Apparently each truck will still have a driver at the helm, they just won’t be driving…This allows them to do other, useful job whilst a computer can control the truck on large roads.

The truck only really works on large roads right now, but when the it gets to a city, the driver takes his position and drives the truck himself.

So how long is it before we see a lorry driver brushing his teeth whilst heading at 65mph down the M1? Seemingly, not long at all.

With industries moving so quickly it is essential to move with them. So what happens in 10 years time when some vehicles might not have drivers and they pull up to a barrier with a keypad? Systems we can install such as Automatic Number Plate Recognition and Long Range Vehicle ID Tags will help move the industry and sector forward, making things more efficient and ready to adapt to any changes in autonomous vehicles or the like.