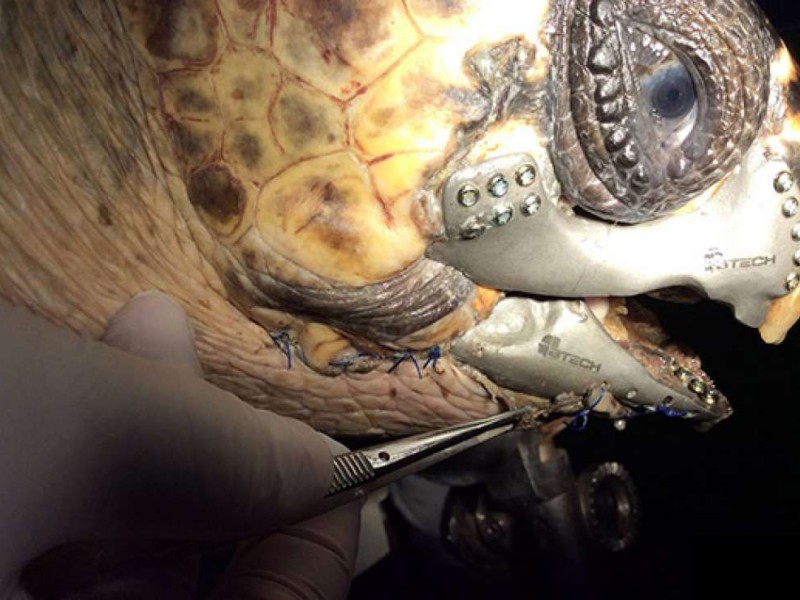 When can I get myself a 3D printed bone?  Well if you’re a sea turtle, the answer is, right now:

Whilst taking a leisurely swim in a Turkish ocean, a propeller from a boat caught this turtles’ jaw. Without human interference, the turtle could not eat and would either bleed or starve to death.

The affectionately named Akut-3 was taken to the Research, Rescue and Rehabilitation centre at Pamukkale University in Denizli, Turkey soon after being found badly injured.

After nurses and vets came to the conclusion that the turtle could never fend for itself with no jaw, they contacted a Turkish company, BTech Innovation, known for custom-making medical prosthetics and implants for humans.

From detailed scans of the turtles head, they were able to see the animals’ jaw and recreate it perfectly. They replied with a couple of peices of 3D printed medical grade titanium that makes the turtle look like something out of a Sci-Fi film. The turtle is now recovering and nearly ready to be released into the wild again.

Although turtle jaw’s aren’t our forte, we often get requests for systems that have not been tried before, bespoke systems. For instance, take a look at a drawbridge we recently completed at Sports Direct. The system allows for half of the warehouse to be saved in the event of a fire.