How Do Traffic Light Sensors Work?

Every traffic light signal has either a timer or sensor, which helps it direct traffic flow. In large cities, where vehicles cross road intersections around the clock, traffic is usually dictated by traffic lights that use timers.

On the other hand, in the suburbs and on county roads, traffic signal sensors (detectors) are usually preferred because they not only manage the inconsistent traffic flow effectively, but, also detect when cars arrive at intersections, when several cars are stacked at an intersection, and, when cars have entered turn lanes. 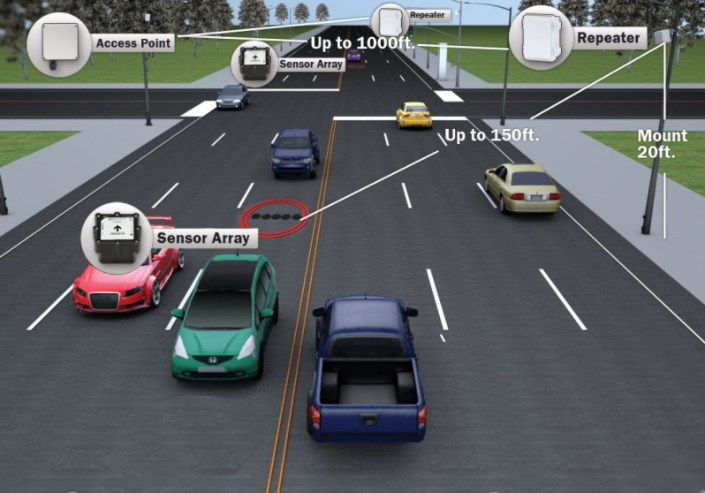 The primary, reliable and most common traffic light sensors are induction loops.  Induction loops are coils of wire that have been embedded in the surface of the road to detect changes in inductance, then conveying them to the sensor circuitry in order to produce signals.

The loop is usually fed with a given frequency from a generator, resulting in an induced magnetic field.  As the magnetic field continues to build due to continuous flow of current, the coils will achieve a stronger field that can last for a period of time even after the switch is opened.

For an induction loop to achieve greater inductance and be more reliable in traffic detection, it should have several wire coils and an iron (magnetic material) core. The core is the material on which the wire coils are wrapped.

When coils have been placed in the grooves and covered with rubbery compounds, they produce a specific quantity of inductance which can be measured using an inductance meter.
But when a car stops on or drives over the loop, the larger steel (metallic) material making up the body of the car will act as the core of the induction loop. Since steel is a magnetic material, it will increase the inductance of the loop and cause a change in the current flowing through the sensor circuitry.

Therefore, when the changes in the magnetic field are conveyed to the signal controller by the wire coils, they cause a change in traffic signal.

Induction loops offer several advantages. They are not affected by the weather and are quite immune to accidental false positives.

They can also cover lengthy parts of the lanes and can be localised according to user needs.
Nevertheless, they may fail to detect bicycle traffic because of the little metallic component of bicycles.

These devices detect a large object travelling towards or away from them and their use is increasing when compared with induction loops. They do not detect light which is probably a surprise for all the taxi drivers who sit there flashing their headlights hoping to make the lights change quicker.

Microwave detectors used for “above ground” use are designed to detect vehicle movements within a pre-determined field of vision providing a vehicle’s speed is greater than three miles per hour.
The choice of inductive loop systems compared with microwave systems is influenced by a number of different factors. Normally the method of detection is determined by the prevailing operational considerations which can vary from site to site.

For instance, where obstructions in the form of overhead hanging objects or extremes of weather are prevalent, inductive loops are normally deployed.

However for less onerous situations, microwave radar systems are being utilised more and more because they are easier to install and maintenance routines are more economical.

Video detection involves the use of cameras connected to specialized cards that have been furnished with “detection zones” defined by specialised vehicle detection software. For instance, pole-mounted video detection cameras rely on video technology to detect cars. The video sensors are ideal for road surfaces where induction loops are impossible to install, such as gravel surfaces and bad road surfaces.

However, video sensors are less popular because they are more vulnerable to bad weather, tend to register false positives because of the glare of car headlights and shadows of vehicles on neighbour lanes, and require more expensive cards.

Geomagnetic vehicle detection use changes in magnetic fields on traffic light systems to detect cars, radar technique detects moving vehicles (though it is frequently used for pedestrian detection because the radars are rarely immobile), and laser technique measures the distance of the vehicle from the intersection (or road surface).

For any further information on traffic lights or for a quote on your very own traffic light system installation, please do not hesitate to get in touch via telephone, fax or email;