How Traffic Signals Are Manufactured Part 2 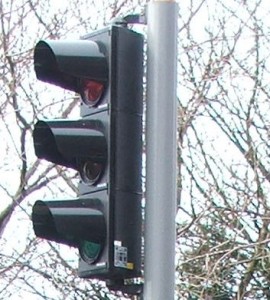 During the moulding process, a large two-piece mould is placed in a machine which produces a massive clamping force. This force clamps the two halves of the mould together so that the cavity (space inside the mould) provides a reverse image of the signal light head component to be cast.

Once the die has been set on the machine, polycarbonate material is added into the “short end” of the mould and a forced into the mould.

Then, the part is cooled further period of time before trimming. During trimming, a stamping device is used to shear off excess material.

The part is then inspected visually to check for burrs. If there are sharp burrs, a file is used to remove them. Similarly, the door points for mounting the housing are checked and tested to see whether doors fit flawlessly.

Once the doors and housings have been produced, they are assembled into a traffic light head. To achieve this, the doors are fitted to the housing using hinge pins and then retained using spring latches.

Thereafter, the support structure is drilled to create holes for fastening the signal light head to the support structure. After assembling the traffic lights head, it is cleaned, further inspected then transferred to the final assembly area where reflectors, lamps, lamp holder and lenses are added using stainless steel fasteners and screws.

Finally, polycarbonate visors, particularly important for industrial traffic lights are attached to every light before the wiring from every light is routed carefully through the hollow light head housing to the mounting point.

Making the Controller and Supports

Electric controller housing is cast or fabricated and then trimmed, machined and painted. Each traffic light must be furnished with mounting points for attaching electrical control boards, but controller assembly can be done by either the traffic signal manufacturer or another company.

Supports are made by casting, spinning or fabrication. The supports are typically hollow and have electrical junction boxes built into their bases for connecting with wires running underground from the controller. And when necessary, decorative elements may be added to the supports to make the traffic light signals fit in with surrounding architecture.

Next, the supports are firmly bolted in position and the wires are pulled through the hollow supports found between the bases and the traffic light signal head mounting points before the signal light heads are connected to the supports. Finally, all the elements of the traffic light system are carefully linked by good wiring and the system is inspected to ensure that individual elements are in the right positions and functioning properly.