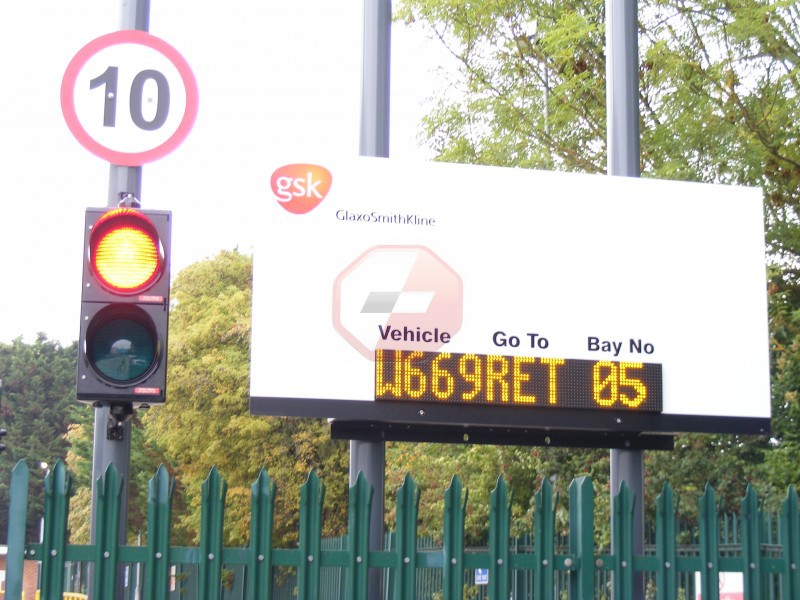 Auto Mates’ customer had a number of issues which were causing them problems across their facility:

Large numbers of heavy transport vehicles (HTVs) from all over Europe enter their site to make daily deliveries.

Auto Mate provided a clever solution to this by installing a series of five traffic lights throughout the site, linked via the long range radio network system, allowing control to be given to the security team in reception using both the touch screen control unit as well as a PC.

The control unit also allows the opening of both the entrance and exit gate barriers across the site, as well as displaying which parking bay HGV drivers should head to via the two large VMS display signs placed around the site. The VMS signs display both the vehicles registration number and which bay they should head to.

Partial control of the system was also given to employees working in the goods inward department via a push button system which, when pressed, would automatically hold the previous traffic lights on red whilst a vehicle was unloaded. This allowed forklift trucks to come out and safely unload a vehicle before another HTV was allowed to pass.

At any one time the security team at reception, via their master touch control unit, could see what colour the individual traffic lights were on, as well as what gates were open/closed.

The barrier system was also interlinked to the fire alarm network across site, meaning that in the event of a fire alarm the complete system adopts optimal conditions to facilitate safe evacuation.

In order to enforce the speed limit, Automate installed 4 vehicle actuated radar speed signs across the site to show what speed the vehicles were travelling at, alerting the driver if they were going over the speed limit by flashing red and warning the drivers to slow down.

Mike Caffrey, Project Manager at Auto Mate systems said “The whole system took us 3 weeks to install, including setting up the long range radio network and testing changing times on the traffic lights. I’m really pleased that our system has both improved safety and efficiency on site”

You can view the full article on PRWeb here

To find out more about how our systems can work for you please contact us on:

News Stories
END_OF_DOCUMENT_TOKEN_TO_BE_REPLACED
News by category
We use cookies to ensure that we give you the best experience on our website. If you continue to use this site we will assume that you are happy with it.Accept